This homeowner in Asheville, NC, (mecca to empty nesters and retirees for the natural beauty of the mountains and mild climate), built her mountain home to enjoy part of the year. The dilemma was that she would only be here seasonally to nurture and care for and the other seasons traveling the world. Thus, a low-maintenance garden was ordered. Who doesn’t want a low-maintenance garden that they can ‘plant and grow’ and still travel the world? This homeowner lives in two locations throughout the year so it’s imperative to have a garden that is satisfied to maintain its beauty with the seasonal rain.

Speaking of rain, the homeowner had two dysfunctional downspouts that were dumping water 8 feet from the house into the yard and saturating the lawn. Rerouting the drainage to a dry river rock bed and drain basins were the first priority to establish stormwater flow 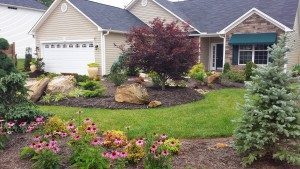 throughout the property in preparation for landscaping. A trench along the back garden bed (which had a previous French drain installed) wasn’t functioning with the sod and soil on top. Therefore, the entire length of the drain was uncovered, dug deeper and lined with landscape fabric. To add that ‘mountain’ and native look river stone was used to mimic a dry river rock bed and hide the drain basins. The water permeated the river stones if there was a heavy flow and was routed to the drain basins on either end of the river stone bed. The homebuilder had routed the downspouts into neighbor’s yards so underground drainage had to be uplifted and rerouted around the entire perimeter of the foundation to the back portion of the home and over the steep hillside digging down some 4 feet.

The homeowner wanted to sit out in the privacy of their backyard and admire the mountainous view so a tiled back patio was laid. To appreciate her view scape, limbs and trees were selected, cleared and replaced with junipers and groundcovers that would smother out the invasive growth and weeds leaving a place for her pooches to safely play. 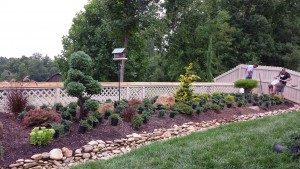 With extra amounts of topsoil left from digging, raised beds were established to plant various specimen plantings (including Tamukeyama Japanese Maple and a Scotch Pine topiary) and native plant material for this area and climate given the perimeters of the homeowner’s choices. To carry the ‘indigenous’ theme, ten tons of mountain stone boulders harvested locally were brought in and set strategically to accent their form while lending foundational anchors to the landscape. Specimen conifers and perennials were placed as if they grew up around the boulders original to the landscape.

Sometimes a garden is established from scratch and the canvas is clean to work from with only a few minor hindrances. The homeowner and company worked through the foundational details of drainage problems and brought to the surface a beautiful plethora of four-season plantings that are virtually carefree and look great from spring to winter.

If you need a custom job installed with your particular needs in mind, give us a call to set up a consultation.

How to Choose a Landscape Contractor and Work Together

A Landscape Collaboration Across Continents
Scroll to top