This excerpt is a collection of topics covered in a video series we nicknamed “French Drain Week”. One portion, filled with detail, was the difference between solid and perforated drain pipe. Solid Drain pipe, is a corrugated pipe, or flexible, pipe which holds water internally. Perforated pipe however, is identical in form to the solid pipe, however has holes or slots cut into the pipe for its entire length, allowing water to enter and exit freely. In this excerpt we cover when and where these two styles are used, and unfortunately often misused in drainage installations.

Solid drain pipe is for relocating collected water. Often times, clients come to us with complaints of a soggy yard after a rain, yet their gutters and downspouts simply exit and release water above ground at the base of the home. Solid pipe can be attached to the downspouts of the home, and routed away from the foundation. We use solid pipe in this instance, as the water is collected and contained by the gutter system and should remain contained as long as needed. 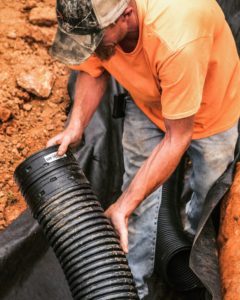 Perforated drain pipe is used for creating an open cavity. In a french drain scenario, A gravel filled trench, lined with fabric, generally speaking will have a 4 inch or 6 inch Perforated pipe at the base. The gravel slows down surface water and has gaps between each stone, allowing water to seep to the base of the trench, easier than the porosity of the clay and loam mix of soil found in the southeast. Once the runoff reaches the base of the trench however, it needs a way out. This perforated pipe has openings small enough for water to enter, while keeping gravel out, creating a highway for water to travel and exit the drain in the designed location. 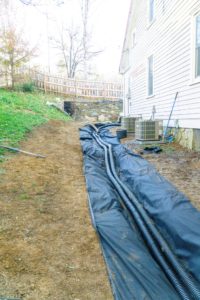 The Most Common Mistake

The mistake most often made with drain pipe is the integration of downspouts into a french drain. Often times downspouts will be tied into the main perforated pipe, rather than a secondary solid pipe. This all happens underground, and many homeowners, if uninformed, will never know their drain was installed improperly until it ultimately fails down the road.

Just remember, the goal of a drainage system is to collect and direct the water. Simply collecting the water off of the roof, only to release it underground in a french drain is not correct and should be avoided. Once confined in a solid drain pipe, water should remain in a solid pipe, until it is ready to be released.

If you are noticing any drainage issues around your property, such as standing water, saturated areas, or the more concerning moisture inside your home. Set up a consultation with our Stormwater Certified Licensed Landscape Contractor today!

Is Mold Consuming Your Home’s Exterior?

A Corner Not Worth Cutting…
Scroll to top